Sleep Paralysis: What Is It & Can It Cause Death?

We explore this often misunderstood sleeping condition, from what it is to how it can be prevented.

brief inability to move or speak just before falling asleep or upon awakening, often accompanied by terrifying hallucinations. It may occur in any individual but is seen especially in individuals with narcolepsy and may be due to a temporary dysfunction of the reticular activating system.

What is sleep paralysis?

Linked to a number of sleep conditions, sleep paralysis is a liminal state between sleep and wakefulness in which a person is partly conscious, but unable to move due to a loss of muscle control; occasions of sleep paralysis regularly involve hallucinations. This paralysis, though explained in various ways throughout history is now frequently linked to REM sleep – a stage of sleep that inhibits the function of motor neurones producing REM sleep atonia.

This condition, where you are temporarily paralysed while waking up or falling asleep, often means you are unable to move or speak despite the fact you’re slightly conscious. Back in 2011, a review found that 7.6% of the world’s population will experience at least one episode in their lifetime. Although this is particularly frightening, it’s not harmful to your health.

Although we’ve briefly looked at the definition, it’s important to understand the science behind it. Overnight, our brain goes through several different sleep cycles, all important stages of sleep in order for the brain to rest, recover and prepare for the next day. One of these stages is REM sleep, otherwise known as Rapid Eye Movement sleep or deep sleep. During this phase, our brains send our bodies into complete paralysis in order to rest. That’s why this condition is often referred to as The Demon of the Bedroom.

However, things can go wrong when we are in the deep sleep stage. During this period of paralysis, you can wake up, whilst still being stuck in REM sleep. This means that you can see your surroundings but are completely unable to move a muscle. The person experiencing sleep paralysis may or may not hallucinate whilst ‘stuck’ in their own bodies due to the terrifying nature of the experience.

‘Most patients say the same thing to describe sleep paralysis: that it feels like you woke up dead. You know that your mind is awake and your body is not — so you’re trapped, essentially’.

An episode will typically last a few seconds until your body ‘wakes up’, however in worst-case scenarios, it can last a few minutes.

Read More: What Happens To Your Body During 8 Hours Of Sleep?

Sleep paralysis can have traumatic consequences for the sufferer. Many of those that experience sleeping paralysis have described the following sensations, either when waking up or falling asleep:

As stated, this causes frightening sleep paralysis hallucinations or nightmares. According to Very Well Health, common hallucinations include seeing a dark figure in the room, or bright flashes. Others have reported seeing animals or colours and some have even seen a version of themselves looking back at them. 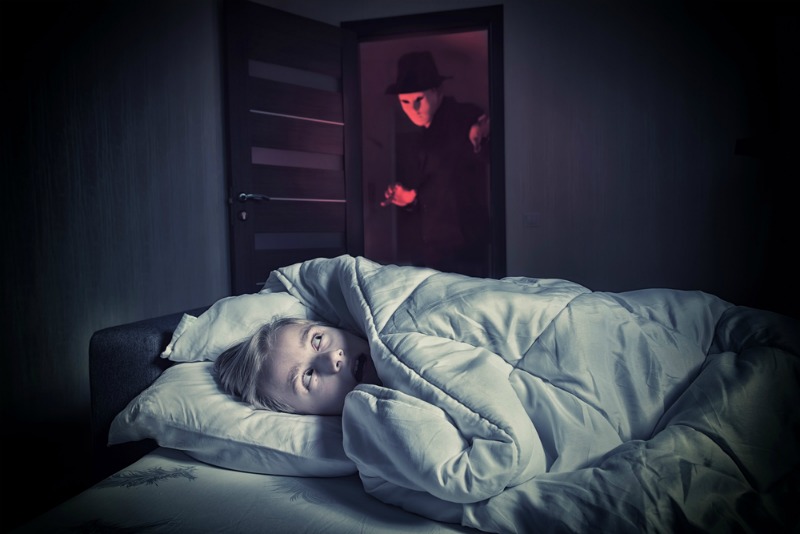 This is because your anxiety levels are extremely high, as your brain is unable to rationalise the experience. This leads your brain to project shapes or even images of yourself within your field of vision, which only induces more panic.

Although waking up with sleep paralysis feels like a living nightmare, it’s not been linked to the content of your dreams, meaning a scary dream isn’t likely to lead to sleep paralysis. Even if you dream that you’re dying, it doesn’t mean you will ‘wake up dead’.

It’s a commonly asked question with multiple theories. And although there is a range of causes that lead to someone experiencing it, experts haven’t yet found a clearly defined source for the cause of sleep paralysis. However, several inducing factors include:

Has anyone died from sleep paralysis?

The simple answer is no, sleep paralysis can’t cause death. The same is true about whether it can physically hurt you. It can’t. However, the stress and anxiety that can result from this parasomnia can have notable effects. If you’re struggling, it’s recommended to speak to your GP for further advice.So, while sleep paralysis has often been described as feeling like you are ‘waking up dead’ there’s no other link to anything serious besides the impact it has upon you when you wake. Clearly, with such dreams, the fear of dying during these episodes is a common concern. Even though it’s particularly terrifying, it’s not harmful. During our research, we found the following from The Sleep Doctor, Dr Breus:

“Research has shown that sleep paralysis is not dangerous. It does not cause physical harm to the body and there are no clinical deaths known to date.”

How to wake up from sleep paralysis

Unfortunately, there’s no concrete way to jolt out of this sleeping disorder. You just have to try not to panic and trust that you will wake up. However, attempting to wiggle your toes or fingers may be a good place to start to bring your body into consciousness. It’s also a good idea to focus on your breathing and try to remain calm throughout.

How to stop sleep paralysis

Of course, it’s difficult to simply recommend that anyone suffering from the problem gets a good night’s sleep in order to overcome it, as often the issue is that the sufferer is unable to do so.

Instead, taking certain steps to hopefully lessen your chances of experiencing it include monitoring your sleep and wake times more effectively so that you always achieve the optimum amount of hours for your age.

The language and mythology of sleep paralysis:

Sleep paralysis as a term was first documented in Samuel Johnson’s A Dictionary of the English Language where it is described as a nightmare – but its history dates back far further, and is intrinsically linked with the origin of the word nightmare itself.

Considered the work of demons – specifically incubi and succubi – which would sit upon the chests of sleepers and lead to sensations of suffocation. The Old English term for these demons is the mare from which nightmare is derived. Sufferers of this condition were often said to be ‘hag-ridden’ and it is this term for sleep paralysis that roots the condition in folklore more than 4000 years old.

Whether the demonic creature is Lilitu of ancient Sumerian texts or Adam’s first wife Lilith who chose damnation over subservience to the first man, the hag, in all its forms, is a cross-cultural monster that has haunted the sleep of humans for millennia – and, following a study in 1991, is still recognised as a possible cause of Sudden Unexplained Nocturnal Death Syndrome (SUNDS) in a population of Laotian Hmong men.

Medical science has not, of course, decided to declare the reality of demons. However, this population, among which otherwise healthy men with a median age of 33 were dying in unexpectedly high numbers from SUNDS, held a sincere belief in a nightmare spirit called the dab tsog. Combined with the stress the belief induced during instances of sleep paralysis, this superstition is believed to be a possible contributing factor in their death.

The impact of culture on an individual’s experience of sleep paralysis may also explain the generational and geographical differences in reporting which see traditional demonic explanations become alien abduction in some demographics and ominous shadow people in others.

Potentially experienced by as much as 8% of the population, the first clinical description of sleep paralysis was published in 1664 by Isbrand Van Diemerbroeck, a Dutch physician that described it as an Incubus or Night-Mare, but despite more than three centuries of study, a definitive cause of sleep paralysis has yet to be found – though a study published in 2021 may have confirmed suspected links:

We identified a population of glycinergic neurons in the ventral medulla that plays an important role in inducing muscle atonia during rapid eye movement (REM) sleep […] Genetic silencing of this pathway resulted in REM sleep without atonia and a decrease of cataplexy when applied to narcoleptic mice.

While it will take a while before statements can be made conclusively, there is at least hope that the cause of such experiences may soon be identified, making more targeted treatments a possibility.

Sleep paralysis is possibly the most widely depicted parasomnia, also known as sleep disorders, in popular culture and has appeared in everything from Brahm Stoker’s Dracula to the X-Files and play a part in many of the Creepy Pasta influenced digital folk-tales of shadow people and other tales of the paranormal or supernatural. With appearances in folklore across the globe and throughout thousands of years, it is no wonder that this frequently terrifying condition has found its way into the tropes of many genres.