Biphasic sleep is an alternative sleeping pattern that could be a potential replacement for the standard monophasic sleep that we, as modern humans, are used to. With more people working from home than ever before and...

Biphasic sleep is an alternative sleeping pattern that could be a potential replacement for the standard monophasic sleep that we, as modern humans, are used to.

With more people working from home than ever before and with the standard 7-8 hour working day disrupted, biphasic sleeping patterns could be the latest sleeping trend for 2021.

If you’re looking to improve your sleeping routines for flexible working and are open to new ideas, a biphasic sleeping pattern is one you can definitely experiment with.

This article will break down all you need to know about this intriguing sleep methodology. You’ll discover what it entails, how to do it, and the benefits that could result from making biphasic sleep your latest goal for 2021.

What is biphasic sleep?

Biphasic sleep is a sleeping pattern that involves the splitting of sleep into two separate segments. It’s also referred to as bimodal, segmented, or diphasic sleep.

The sleeping routine includes both a night-time and daytime sleeping interval. These are usually comprised of a 5-hour segment and a 1-1.5 hour sleep in the day. However, this can alternate with other variations involving a 6-hour sleep at night followed by a 20-minute nap during the day.

As you can begin to see, this is completely different from the standard monophasic sleeping pattern people commonly adopt, which involves sleeping for 7-8 hours a night. However, as you may have experienced at some point in life, achieving this many hours of sleep can sometimes prove to be a challenge.

Interestingly, the monophasic sleeping pattern is hypothesised to have become the norm as a result of industrialisation. The working day made it difficult to achieve daytime naps, resulting in the majority of sleeping occurring during the darker, later hours.

Unfortunately, with the application of technology and brighter screens, maintaining a healthy sleeping schedule has become problematic in modern times. With sleep becoming an evermore talked about topic, it can become only natural people would begin researching alternative sleeping patterns like biphasic sleep. 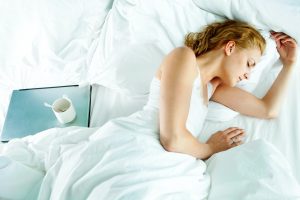 Read more: 4 Sleep Cycles That You Didn’t Know About

What are the benefits of biphasic sleep?

Biphasic sleep boasts a number of potential benefits, including:

However, many of these pros are derived from studies on napping. They’re not the findings from studies investigating biphasic sleep directly.

When looking at the historical studies on biphasic sleeping patterns, the initial perception is positive.

One article discussing the change to monophasic sleeping patterns as a result of the invention of the working day advocates the use of biphasic routines. As monophasic patterns were a product of social change, there is an argument they’re not natural. If we were to look further back in time, it is likely we’d see biphasic and polyphasic sleep being used more regularly.

However, if we were to look into studies investigating napping and use them as a proxy for biphasic sleep, the results are mixed.

Research in 2010 found daytime napping to have a positive influence on cognitive functioning with larger benefits being seen with naps lasting longer than 30 minutes.

Conversely, one study in 2012 found napping to be a poor method to achieve quality rest and could result in lower cognitive performance. Bear in mind this study was performed on pre-schoolers and may not be generalisable to a wider population.

As you can see, it’s difficult to get a straight answer.

The takeaway here is that everyone is different, and situations vary. Your best bet is to experiment with this sleeping style yourself and note down how you’re feeling every morning. Do you feel well-rested? More alert? Or do you feel sluggish and exhausted?

In either case, if you’re struggling with sleep, consulting your GP is always advised.

Read more: Everything You Need To Know About Sleep Cycles

How to achieve biphasic sleep

Biphasic sleep can be performed in two core ways:

This doesn’t have to be complicated. If you’re unsure which one to choose, simply alternate and see which one gives you the best impact on daytime performance.

What’s the difference between biphasic and polyphasic sleep?

If you’ve heard of biphasic sleep, you’ve probably heard of polyphasic as well.

The polyphasic routine splits out into three different styles:

You begin to ask yourself the question: why in the hell would anyone do this?

Limiting your sleep to just 2 hours is extreme. However, the individuals who perform this extreme kind of sleep purge claim it makes them more productive and cognitively enhanced.

Here’s what Healthline has to say:

“People might actively pursue a biphasic or polyphasic sleep lifestyle because they believe it makes them more productive. It creates more time for certain tasks and activities during the day, while maintaining the same benefits of monophasic sleeping at night.”

Of course, for some, there will be drawbacks. In some cases, polyphasic sleep is a result of an underlying sleep disorder.

It’s important to assess your needs and goals when it comes to experimenting with extreme sleep routines like the polyphasic one. After all, there are numerous limitations to sleep deprivation.

What to do next?

Biphasic sleep is an alternative sleep routine to the standard monophasic pattern which is composed of 7-8 hour sleeping interval. In the biphasic routine, you can expect to sleep 5-6 hours a night with one 20-minute to 1.5-hour nap. With the social creation of the working day, monophasic sleep became the norm in the modern world. However, as indicated above, there may be benefits in taking short naps during the day to supplement sleep.

Start small and cut your night-time sleep by an hour, replacing that with a nap during the day and see how it impacts your energy levels and productivity. If you’re looking to learn more about alternative sleeping patterns, we have an infographic to visualise every sleeping pattern available. You can get access to that here.

And if you’re curious to learn more about biphasic sleep or feel we’ve missed anything from this article, please drop us a comment below!

See all articles by Lewis Ridley