The stress response that makes you tackle or run...

How much sleep do I need?

A good night’s sleep is essential at any age, but as we grow into adulthood we don’t need quite as much sleep. The Sleep Foundation recommends 7-9 hours for adults aged 18-64 years, but as a general rule, most researchers agree that 8 hours is optimum. Of course, everyone is different, and some people can get by just fine on as little as 6 hours, whereas others prefer to hit 9 hours minimum. Read more about worldwide sleep data here.

Sleep deprivation is bad for our health in many ways. Mild symptoms from lack of sleep include irritability and a general feeling of fatigue. But when you start to really rack up the hours of sleep debt, other undesirable effects can include depression, obesity, heart disease and diabetes. Check out this article, How to Understand and Overcome Sleep Deprivation, to learn more about sleep’s crucial purpose.

The fight-or-flight response is naturally ingrained in us from our caveman ancestors. They’d often be faced with wild animals charging toward them, such as hairy mammoths or mountain tigers, and they’d have to fight or run (take flight) for their lives. Our stress response is also linked to our circadian rhythm – our internal body clock. When we’re exposed to external stress, we produce cortisol, a hormone that adapts energy to a fight-or-flight incident. Read more about your body clock and how to kickstart it here.

What is fight or flight?

Our fight-or-flight response is triggered by a release of hormones that prepare the body to stay and face a threatening situation or flee from the scene to safety. A scientific explanation by The American Institute of Stress says:

The sympathetic nervous systems stimulate the adrenal glands triggering the release of catecholamines, which include adrenaline and noradrenaline. This results in an increase in heart rate, blood pressure, and breathing rate. After the threat is gone, it takes between 20 to 60 minutes for the body to return to its pre-arousal levels.

Other physical signs that you’re in fight-or-flight mode include pale or flushed skin, trembling, and dilated pupils.

Fight or flight was originally a short-term response to sudden dangers such as wild animals, but modern-day causes can have more of a long-term effect. Stress from work, cyberbullying, and financial worries can all put you into a fight or flight and this has a negative effect on health and wellbeing. Medium states that “prolonged release of stress hormones means that blood pressure goes up, the cardiovascular system is taxed to do its job, the immune system is weakened, digestion doesn’t happen properly, you get headaches and have trouble winding down. So, our stress response is doing pretty much the same things as it was doing for our ancestors, but for longer periods. A short burst of adrenaline gives us motivation and energy for the challenges in life, but a steady stream of it just makes us run down. It turns out this takes a serious toll on the body, known as allostatic load.” 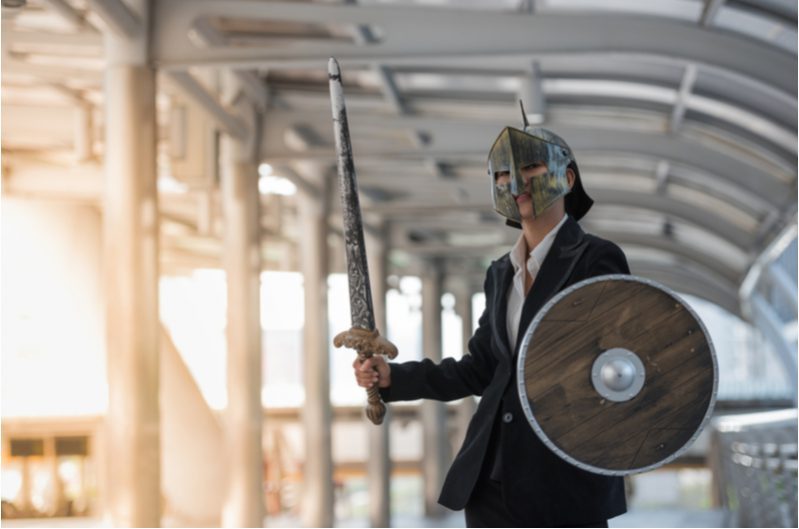 How lack of sleep causes a fight-or-flight response

‘When your body goes into fight-or-flight mode, your adrenaline surges. Your blood pressure and heart rate also increase. The fight-or-flight response that can occur due to a sleep disorder impacts your body much like slamming on the brakes to avoid an accident when a car in front of you stops unexpectedly. Normally, these levels would be very low during sleep.

Additionally, continuously heightened brain activity during sleep can increase your cortisol levels. Cortisol keeps blood sugar high and alters insulin levels. If insulin is not secreted correctly, it redirects itself and instead enters fat cells, which leads to weight gain and vulnerability to type 2 diabetes.’

Additionally, Very Well Mind states that the fight-or-flight response is triggered by modern-day stressors and these prolonged periods of stress are what cause sleep deprivation. So, strictly speaking, this point of view believes that the fight-or-flight response is not triggered by a lack of sleep solely, but rather the contributors to the lack of sleep in the first place.

Fight or flight and insomnia

However, it’s a bit of a catch-22 situation as other researchers believe the opposite: fight-or-flight mode is triggered by a lack of sleep, and this then causes stress. Insomnia Free states that:

How to combat fight or flight

The first and most important thing to do is to recognise what’s happening. If you feel tired but wired, this is an indication that your body is in fight-or-flight mode. There’s nothing worse than feeling exhausted and wanting to sleep when your mind is racing. Some simple breathing techniques can be an effective remedy in calming your mind and reducing your adrenal symptoms. Try this yoga breathing exercise as recommended by Very Well Mind:

In addition, you need to address what is causing you to go into a hyperarousal state and try to remove or reduce its impact on your wellbeing. If you’re stressed at work, try talking to a trusted colleague. If you’re worried about money, try seeking out professional financial advice. If your relationship is going through a rocky patch, talk to your partner and perhaps consider counselling. Any step forward is progress. The last thing you want to do is remain where you are while your health and wellbeing deteriorate.

How to get a good night’s sleep

Once you’ve addressed the issues and made steps toward potential solutions, it’s time to focus on trying to get a good night’s sleep. Common knowledge is to stick to a bedtime routine, wind down with a warm bath or shower, and make your bedroom a sleep sanctuary. Easier said than done, right? Well, check out this podcast with Dr Pixie McKenna where insomnia is discussed with further ways to overcome it.

You can also find more tips and tricks on how to get a good night’s sleep with this fun flow chart.

To conclude, sleep deprivation and/or prolonged stress can cause your fight-or-flight response to kick in. Although it can be an alarming experience, it’s completely natural and is simply a sign that your body is looking out for you. Do what you can to minimise your day-to-day stressors and practise good sleep hygiene to try to keep unwanted symptoms at bay. Keep this up and your fight-or-flight response should remain dormant until it’s really needed.