I love to sleep. If there was an Olympic medal for sleeping, I’d be right there, fighting for the gold. My experience in the sleep department spans several assorted venues – deep woods on camp cots...

I love to sleep. If there was an Olympic medal for sleeping, I’d be right there, fighting for the gold. My experience in the sleep department spans several assorted venues – deep woods on camp cots with boy scouts, in sleeping bags on snow-covered Russian and Canadian tundra covered only with branches and parachute canvas, on a steel-hardened bunk bed hanging inside a metal tube affixed some 65 feet beneath the sea… But the ultimate venue – a ‘sleep station’ free from the encumbrance of gravity – was located 250 miles above the Earth!

As a US Astronaut, I had the privilege of living and working on board two space shuttles (Atlantis and Discovery) and at the International Space Station (ISS). Totalling 167 days in space, I learned that sleeping without gravity is both a challenge and an adventure. You may sleep in any orientation you choose. Absent of gravity, the only true needs are adequate ventilation (including cooling), peace and quiet and a few tie-downs. The bed of choice is a sleeping bag, US vintage for shuttle fliers and Russian design on ISS. Both include a liner and zip-up front, providing adequate warmth, easy entry, and even easier exit. A final, key ingredient is armholes, allowing sleeping astronauts to take on the appearance of a comatose, stationary zombie, arms extended forward and parallel to the ground.

My first night of sleep on a shuttle was lacking, to say the least. In space for the very first time, I watched fellow crewmates as they jockeyed for prime positions on the shuttle’s mid-deck. A true rookie, I waited to see what was left. Tied to Atlantis’ forward wall housing mid-deck lockers, and squeezed between fellow first-time fliers, John ‘Danny’ Olivas and Steve ‘Swanny’ Swanson, I slept vertically (head toward the ceiling) in the hope of somehow fooling myself into thinking I was back on Earth. Clad in boxer shorts and a short-sleeved t-shirt, I donned a Lone Ranger-like eye cover mask to help ward off any light sneaking in from the sunrises and sunsets systematically executed by orbital mechanics every 90 minutes. Waking tired after a restless night, I somberly performed the day’s required pre-docking duties. My next attempt at satisfactory shut-eye would be aboard humanity’s most technically-complex collaboration, the ISS.

The ISS was different. My astronaut colleague Suni Williams (I had trained with her for years) had graciously vacated the solitary (at that time) US sleep station, allowing me to move in immediately. It had everything I needed. Barely the size of a phone booth (kids, Google it), it was freezing cold (great air conditioning), almost totally dark, and, for the most part, peacefully quiet. Yet it would take nearly a week for me to finally achieve reasonable sleep.

My evening ritual was always the same. After brushing my teeth and removing my clothing – everything except a pair of white boxer shorts – I ‘flew’ into my open-zippered sleeping bag. Maintaining my shuttle-born heads-up vertical orientation, I stuffed my arms through the ergonomically placed holes, closed the zipper about half-way and grabbed my paperback copy of Clive Cussler’s Sahara. Floating weightlessly, held in place only by the confines of my anchored sleeping bag, I continued my nightly assault on the adventures of Dirk Pitt and Al Giordino. 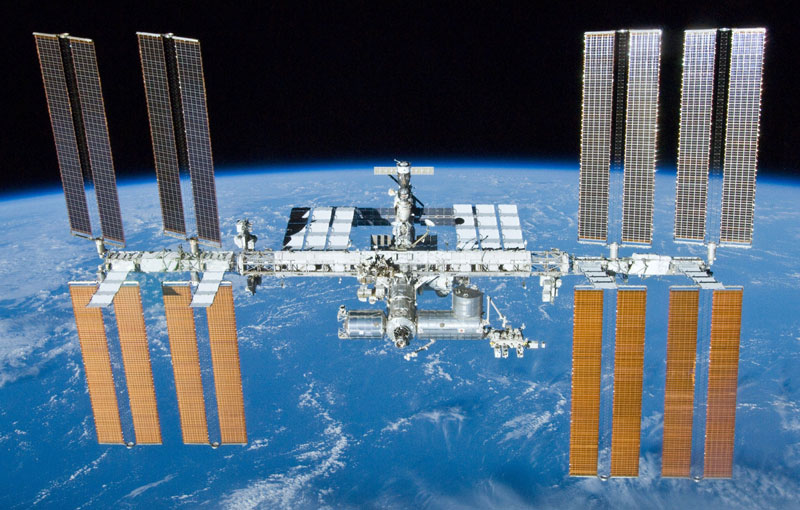 Essentially exhausted from the day’s combination of exercise, equipment maintenance, science experiments, and increasing CO2 build-up, sleep came easily – my eyelids heavy and beginning to close. Most nights, as my body began to relax, and my grip released the fanning pages of my paperback, I headed for the initial round of the various sleep stages, my ultimate destination being REM. But, as happened often at times on Earth, I awakened with a start from the sudden muscle contractions regarded as stage 1 sleep. Caused not by the jerking reaction from a dropping head and the pull of gravity, and absent of any sensation of falling, I felt the need to open my eyes. And there, right where I’d left it, floated my adventure novel, lacking only in display of the proper page!

As I reached a repeatable rhythm of sorts in the sleep department, I would re-learn that the brain is an incredible thing. With several nights of decent sleep (I would average about 7 hours and 20 minutes per night – much better than I get on Earth) under my belt, I discovered that, during those initial stages of falling asleep, my brain was telling my body I was lying on a mattress. Slowly drifting off, I felt pressure points up and down the entire length of my spine, as if I was back in Houston, lying horizontally on a firm, supporting mattress. Amazing!

I was not a napper in space as I am on Earth. As I recall, I only took a power nap once. Waiting for a connection with the folks at the Marshall Space Flight Center in Huntsville, Alabama, I was at my laptop, floating near my sleep station, reading emails. Feet firmly affixed within an over-designed foot restraint, I had no gravity to dictate any Earth-bound-like head bobs that could shake me back to reality. Only through watching post-flight video did I catch myself falling backward, as if in slow motion, floating at a 45-degree angle, arms crossed gently over my chest, snoozing like a champ!

My sleep in space was, minus the lack of gravity, typical. I was frequently awakened by minor annoyances, just like on Earth. Unplanned fire alarms, energetic conversations from late-night Spanish revellers blasting through the communication system (that’s another story!), and the need for a timely trip to the bathroom, were examples of random sleep disrupters, similar to those experienced in everyday life on our home planet. Was it difficult to sleep in space? Not a chance! And I wouldn’t change a minute of it.

I think it’s time for a nap… sweet dreams!

See all articles by Clayton Anderson