The Difficult Relationship Between Teenagers and Sleep

Teenagers and sleep have a tricky relationship. We interviewed sleep expert Dr Robert Rosenberg to find out the facts behind teenagers' sleeping habits

If you have teenage children, you will notice that their sleeping habits are perhaps quite different from your own. Teenagers and sleep have a love/ hate relationship. But how much of this is by choice and how much is it due to biology? Sleep expert Dr Robert S Rosenberg answers The Sleep Matters Club’s questions on teen sleep.

Teenagers are known for sleeping a lot. Do they actually sleep more than adults or is this a bit of a stereotype?

As I go into detail in my book Sleep Soundly Every Night , Feel Fantastic Every Day, teenagers have significant  changes in their circadian rhythms. They require more sleep than adults. In most studies, they seem to do best with nine to ten hours of sleep. Most adults require seven to nine hours of sleep.

Is there an optimal length of time a teenager should sleep each night?

Yes, as referenced above. Stanford University conducted a study on sleep and student athletes. They found that the closer to ten hours the student athlete slept, the more their athletic performance improved.

Think there’s only one way to sleep? Click the image to discover four alternative sleeping cycles and how they could be better for you.

What changes will we notice as they transition from children to teenagers?

We call it a phase shift. Many teenagers undergo a shift in their circadian rhythms. They find that they need to stay up later to feel sleepy. Their normal bedtime may shift as much as three hours or more. This is then compounded by their staying up later and waking up later on weekends, further disrupting their circadian rhythms and making it even more difficult to go to bed earlier and wake up on school days.

Why is it then that teenagers sleep more than adults and children? What benefit does it have?

They do not sleep as much as children. School age children need ten to eleven hours of sleep. As for why children and adolescents need more sleep than adults, in part it is related to neural development, a great deal of which occurs throughout sleep. It is also related to growth. We produce the majority of our growth hormone while asleep, especially in deep sleep (slow wave), which occurs during the first few hours of sleep.

How long does the teenage phase of sleep last?

In the majority of teenagers, the delay in circadian rhythms is over during their early twenties. However, about 7% will continue to manifest this problem as adults. Many of them will find the night shift to their liking. 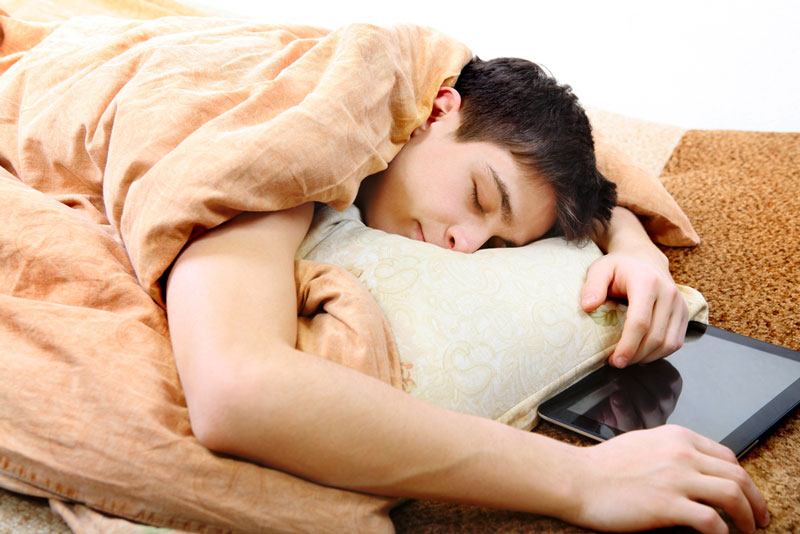 Does sleep differ for teenage boys and girls?

No, boys and girls seem to need the same amount of sleep. However, insomnia seems to be more common in girls. This may be due to the fact that teenage girls seem to experience more interpersonal stressors with regards to their relationships than boys do.

Are there any sleep disorders that may affect teenagers more than children or adults?

Yes, Delayed Sleep Phase Syndrome. This is a common circadian disorder seen in teenagers more than any other group. It is due to the above-mentioned shift in their circadian clocks. Basically, it is a form of social jet lag. If allowed to go to sleep and wake up later, they do fine. However, because of early school start times they go through the day sleep deprived.

What are the consequences of teenagers not getting enough sleep?

There are several consequences. The first is a definite increase in car accidents. Another is an increased incidence of athletic injuries. Insufficient sleep is also a major cause of cognitive problems such as paying attention in school and impulse control. Finally there is a higher incidence of depression, anxiety and suicide in sleep deprived teenagers.

So should we cut teenagers a bit of slack when we struggle to prise them out of bed?

Yes, but it goes deeper than that. We need to convince our local schools to institute later start times, especially for teenagers. In the USA, several studies have demonstrated an improvement in academic performance and a decrease in motor vehicle accidents in school districts that have adopted this policy.

It’s clear that the differences in teenager’s sleep to that of adults and children could lead to misunderstandings, but the stereotypical ‘lazy teens’ aren’t necessarily lagging behind on purpose. Have Dr Rosenberg’s answers helped you understand teen sleep any better?

See all articles by Robert Rosenberg

What Do Dreams of Waterfalls Mean?