Songs To Help You Sleep

Listening to music can help you fall asleep faster and sleep for longer. Let's explore why this is and what songs are the perfect aid for a good night's sleep.

Do you listen to songs to help you sleep? It’s said that music has a direct effect on our nervous system which allows our bodies to prepare for sleep. Here, we explore the benefits of listening to music while you sleep, and the best songs to help you fall asleep. You can add this music to your ‘Sleep Songs’ playlist and enjoy a restful night’s slumber.

Is it good to sleep with music playing?

Around 62% of the general population use music as a tool to help them sleep. Music has been shown to improve sleep quality, especially for those who have a sleep disorder, such as insomnia. Playing music before you fall asleep as well as playing music during sleep can have positive effects for not only adults but children too.

So, is it better to sleep in silence or with music? There are many factors involved when considering the answer to this question. First, this will vary from person to person. What works for one person may not work for another. A lot of people struggle to sleep with music playing as they find it distracting. This is more typical in light sleepers. However, many people rely on music as a way of drowning out environmental sounds that they hear throughout the night.

The benefits of sleeping with music playing

Listening to relaxing music before bed has been shown to have positive effects on our bodies. Playing soft music before bed can act as a calming distraction from the daily stresses of life. The other great benefits of sleeping with songs playing include: 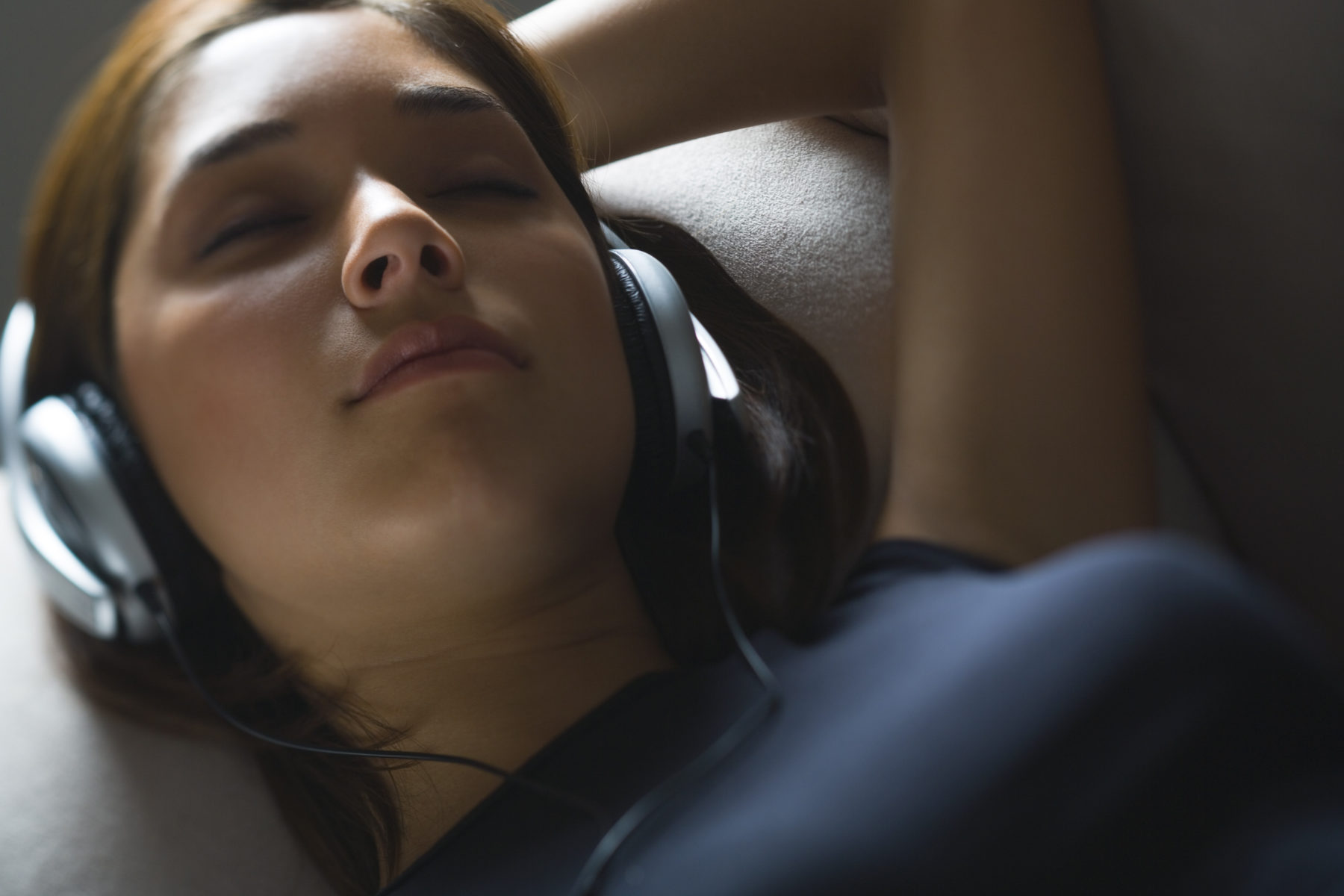 Can you learn anything while you sleep?

Wouldn’t it be incredible if we could learn new things in our sleep such as languages? Unfortunately, we can’t learn new things in our sleep, but we can hear them whilst we are sleeping. This means that if you fall asleep listening to the same words being repeated over and over, you can recall around 10% of the words the next day. This is a great way to improve your vocabulary.

What is the best music to listen to when sleeping?

As you can imagine, using music as a tool to help you sleep is very much dependent on your choice of music. Playing loud, fast-paced and unpredictable songs can wake you up during the night, in turn, they will lower your sleep quality. We recommend picking music that is relaxing and calming. You could try listening to the sound of white noise.

Most music is accompanied by lyrics so perhaps you would rather pick something more instrumental or classical. Finding the right song to make you fall asleep can take time. Only you can discover what you should listen to before bed and that’s by trial and error, as well as some research. We have selected some of our favourite sleep songs to help give you a head start.

Songs to help you sleep

This Icelandic band has a catalogue of beautiful songs that could help you sleep. Their soothing voices in their native language mean that you won’t be distracted by the words of the song. This song has an ethereal feel to it and will be sure to send you off into dreamland with no problem at all.

2. Only Time by Enya

Irish singer Enya is known for her angelic-sounding songs and peaceful instrumentals. You’ll probably recognise this song all though you may not have known the name of it before. It has a soothing pace and Enya’s voice is soft and wispy, exactly like a lullaby.

3. I’m So Tired by The Beatles

You may not be familiar with this Beatles number, and it was said to have been written because of John Lennon’s experience suffering from insomnia. As the title suggests, the lyrics are mainly focused on not sleeping, but the tune and feel of the song are drowsy and delirious. It’s one of the Beatle’s hidden gems and it is definitely one for the bedtime playlist.

The waltz beat of this sleep song gives it an otherworldly feel. When paired with the lead singer Jack Steadman’s voice, it’s a beautiful bedtime song. The soft guitar and extended humming towards the end of the song make it a great tune to practise breathing exercises and relax to.

5. I Went to Sleep by The Beach Boys

The song tells the story of a person who often falls asleep. Sounds boring, right? When it is paired with the deep bass that mimics a slow heartbeat and twinkling bells in the background, as well as the Beach Boys’ signature melodies, this really is like an adult lullaby. The hypnotic quality of the song will ensure that it sends you to sleep.

6. The Moon Song by Karen O and Ezra Koenig

The harp accompaniment to this song instantly gives it a dreamlike atmosphere. And with the overlay of sleepy voices from Karen and Ezra including stunning harmonies, makes it an excellent sleep song to listen to before bed. Also, the fact that they are talking about the moon makes us think of sleeping and dreaming. What more could you ask for?

Not only are there songs that can help you fall asleep, but there are also songs written about sleep. Because after all, musicians struggle with sleep too. Below we’ve picked apart why these singers were unable to get some decent shuteye.

While Aerosmith was arguably one of America’s greatest hard rock bands of all time, they give terrible sleep advice. The song is allegedly about treasuring every moment spent with a loved one, but this would be impossible to do if you are getting your 7-9 hours per night.

A study by Ohio University in May 2017 found that couples who slept less than seven hours a night were more likely to argue in a hostile, negative way. If you followed in Steve’s footsteps, you may be too busy arguing about whose turn it is to do the washing up to treasure your time together. Admittedly, Steven Tyler wouldn’t have had access to this study in ’98 but nevertheless, we do not recommend listening to his sleep advice.

I Need Some Sleep featured on the compilation album Meet The Eels: Essential Eels, Vol. 1, released in 2008. From the lyrics in the song, it’s clear that the singer is suffering from a recent breakup and is struggling to sleep because of it.

Everyone says you just gotta let it go.

Thankfully, this is some good sleep advice from The Eels, who are right to have determined that they need to sleep. Sleep is restorative both physically and mentally, so if you’re suffering from heartbreak then you may find sleep is the best medicine for your ills.

According to a study into divorced couples both before and after divorce, it was discovered that those that managed to achieve deep sleep were more likely to be faring better emotionally. So, if you’re pining for a lost love then take a leaf out of the Eel’s book and start counting those sheep.

Insomnia is one of the most successful songs by the band Faithless, becoming a major hit on the dance charts:

But there’s no release, no peace / I toss and turn without cease

This insomniac, take an original tack / Keep the beast in my nature under ceaseless attack.

We wouldn’t necessarily recommend that you become such a slave to your insomnia that you make working during your wakeful hours a regular occurrence, as Maxi Jazz does. However, if you are struggling with sleeplessness in the night then getting up and doing something is quite good sleep advice, but just make sure it isn’t as stimulating as writing song lyrics. Instead stick to reading an easy book away from your bed, rather than doing anything too mentally challenging.

Bon Jovi is the last person we would recommend anyone turn to if they were looking for sleep advice. Not only does he believe he can exist without sleep, but he also doesn’t think he should have a bed!

To summarise, yes, music is a great way to fall asleep. Next time you’re tossing and turning, try listening to the sleep songs we have shared above and see if you can reap the benefits we’ve discussed. Remember, play the music on a low volume and stay clear from chord headphones. If music isn’t for you, discover the best podcasts to help you sleep.

10 Tips For A Better Night’s Sleep And Avoiding Insomnia

Which Song Should You Wake Up To In The Morning? [Infographic]