What Does ‘Sleeping With the Fishes’ Mean?

Despite being most famously linked with the eponymous Godfather franchise, the phrase 'sleeping with the fishes' has a long history, stemming all the way back to the Trojan War.

The phrase ‘sleeping with the fishes’ is a euphemism that has little to do with sleep. Instead, the ‘sleeping’ in this phrase is metaphorical and the individual referenced by the phrase is deceased and, in modern use, is generally understood to have been murdered and disposed of in water, though death by drowning was among its traditional uses.

While the majority of people familiar with this phrase will have come across it in the film adaptation of The Godfather, where it is claimed as a phrase used euphemistically by the Sicilian Mafia, the origin of the phrase is likely to be found almost 3,000 years prior to the book on which the film was based – though likely in the Mediterranean.

In fact, the first appearance of a phrase that is close enough in construction and meaning to be recognisable is in The Iliad by Homer:

Achilles grabbed a foot, slung him into the river,

washed away downstream as he cried above him

savage words to wing him on his way: “There—

lie there! Make your bed with the fishes now,

they’ll dress your wound and lick it clean of blood—

so much for your last rites! Nor will your mother

lay your corpse on a bier and mourn her darling son—

whirling Scamander will roll you down the sea’s broad bosom!

However, the first English translation of The Iliad was not until 1581 by Arthur Hall who translated only the first 10 books. As this section of text comes in book 21, this or a close version of the phrase may not have appeared in English until Thomas Hobbes, philosopher and author of Leviathan, penned his translation around 1676 where it appears as:

Achilles threw him then into the brook,

And said insulting, Go now to the deep,

And feed the fishes that will lick your blood;

Your mother over you shall never weep,

But to the sea you go shall with the flood,

The phrase ‘feed the fishes’ is the common form of the phrase, it seems, for more than a century and a half – appearing with relative frequency in texts such as Richard Cumberland’s 1785 text The Observer – Being a Collection of Moral, Literary and Familiar Essays: 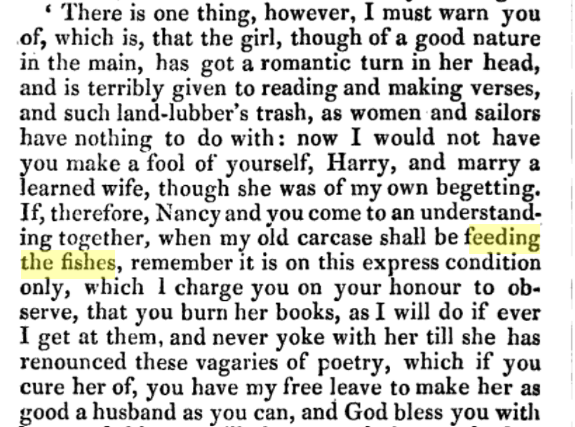 The first appearance of the phrase as we would recognise it, in English, then follows in Edmund Spencer’s travelogue: Travels in Circassia, Krim-tartary, &c Including a Steam Voyage Down the Danube, from Vienna to Constantinople, and Round the Black Sea, in 1836. II · Volume 1 which features the following:

As a remedy against the danger, the admiral and the captain proposed that the steam should be immediately got up! Now all persons conversant in any degree with steam navigations are aware that this undertaking, particularly when the boiler is cold, cannot be effected in a few minutes, and in the present instance our vessel was so near the corvette, that before the boiler could have been heated we should have been most probably sleeping with the fishes.

While its evolution is more convoluted than many familiar phrases in English, the long and winding road takes us from Homer and Hobbes and eventually delivers us to the source we’re probably most familiar with, Mario Puzo – author of The Godfather. However, we can say with a high degree of confidence that the phrase was in common use as early as the turn of the 19th century but probably owes its existence to the story of the Trojan War.

Most appearances of the phrase owe much more to The Godfather than The Iliad. In almost any work of fiction featuring gangsters, from The Sopranos to Grand Theft Auto: Vice City all the way through to The Simpson’s Fat Tony, the phrase has become an organised crime cliché,  more often used with tongue in cheek than as a threat.

For other well-known sleep idioms check out what ‘hit the hay‘, ‘sleep like a log‘, ‘let sleeping dogs lie‘ or what waking up on ‘the wrong side of the bed’ means.

Lion Dreams – What Do They Mean?

What Do Dreams of Winning Money Mean?

What Do Dreams of Water Mean?