Sleep Talking: Here’s Everything You Need to Know

How many times have you woken up to the terrifying words ‘you were talking in your sleep last night’, followed by your partner or roommate’s delight in telling you your outlandish confessions? Sleep talking is a bizarre, sometimes entertaining phenomenon that seems to happen to the best of us, so there’s no need to lose any sleep over it.

If you are asking yourself; “does talking in your sleep mean anything?” or “why do I talk in my sleep?”, we have the answers for you. Dreams has compiled everything you need to know, from why you sleep talk to how to record yourself doing it, and even how to prevent it.

What is sleep talking?

Somniloquy, more commonly known as talking in your sleep, can range from complete gibberish to full monologues. It can be completely spontaneous or induced by your partner interrogating you in your sleep. It can take place occasionally or on a nightly basis.

Although it seems that everyone has a hilarious sleep talking story to share, it usually affects only 5% of adults and 50% of children aged 3 to 10. But if you’re part of that statistic, worry not, because doctors don’t usually consider this type of parasomnia as a medical problem.

The worst part of talking in your sleep is that a sleep talker usually doesn’t remember anything that’s said during their sleep. As much as you’d like to think you’re reciting the works of Wordsworth, most unconscious utterances are usually brief and nonsensical.

If you manage to say complete sentences, this nocturnal natter may be harmless or you could blurt out your darkest secrets. However, such confessions shouldn’t be taken seriously. According to the National Sleep Foundation, such outbursts are not considered the product of a rational or conscious mind, it is therefore inadmissible in court.

What are the best sleep talking apps?

If you’re curious to hear your sleepy speech for yourself, there are quite a few sleep talk recorder apps to help you. Such apps listen for sounds while you slumber and start recording the mumbling. In the morning you can then listen to what you, or your partner, has blurted out during the night. 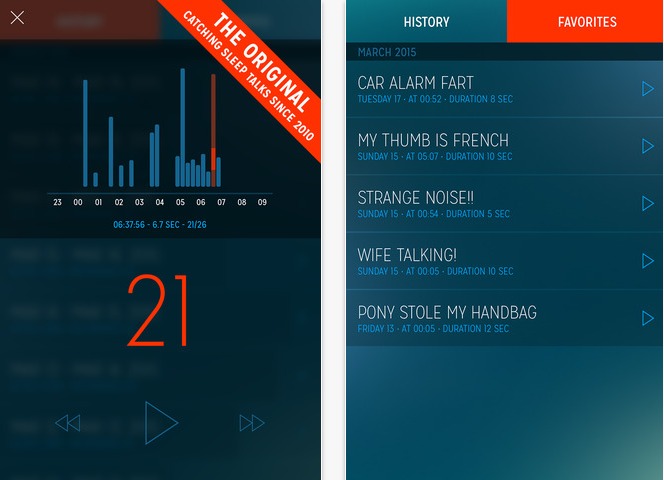 Why do people sleep talk?

Why do people talk in their sleep? Well, many people assume that talking in your sleep occurs during the REM phase of sleep, or in layman’s terms, while we dream.  Sleep talking during this phase is quite common, but it is not exclusive as you can sleep talk during any stage of sleep.

If you talk during your dreams, it is what sleep therapists refer to as a motor breakthrough, which means the words spoken in the dream are actually said aloud.  It’s also common to sleep talk during a transitory phase, which is when you become half-awake.

Many different factors can cause sleep talking, including certain medication, fevers, mental illnesses, emotional stress or substance abuse. Researchers also found links between genetics and sleep talking, this suggests that sleep talking parents are more likely to have children who also sleep talk.

‘Sleep talking is very common in the general population and may have a genetic underpinning. In most cases it is NOT associated with any serious forms of psychopathology.

Generally speaking, sleep talking can be a frequent event where the sleeper vocalizes anything from mere utterances to a coherent entire conversation. Often the sleeper will have a monotone voice or grunt out the words, sometimes incoherently.  While others have been known to actually sing in their sleep.

This usually occurs in the lighter stages of Non-REM sleep (Stages 1 and 2) and usually sleepers have no memory of these vocalizations. The actual words or phrases have little to no truth, and usually occur when they are stressed, during times of fever, as a medication side effect or during disrupted sleep.’

How to stop sleep talking?

If you stick to a regular bedtime and ensure you get plenty of sleep, it can help reduce how often you sleep talk. Also refraining from alcohol, heavy meals, and unnecessary stress is a good way to stop sleep talking. For your partner or roommate, earplugs are recommended if they don’t want to laugh at your ramblings.

As we’ve said, sleep talking is usually harmless. However, in some cases, it can be a symptom of a more serious sleep disorder.

For example, REM Behaviour Disorder (RBD) and sleep terrors cause some people to shout or even scream during their sleep.

Sleep talking can also occur with sleepwalking and Sleep-Related Eating Disorder(SRED), a condition during which a person eats while asleep. If sleep talking is severe or persists over a long period of time, see your doctor.