Just like humans, dogs sleep in a variety of positions. From sleeping on their side to sleeping on their back with paws in the air, we can learn a lot about our furry friends through their chosen sleeping position and habits

Similar to their human counterparts, dogs love to sleep on their side. Lying on their side with their legs extended is one of the most common sleeping positions for dogs, it’s especially common in puppies and older dogs who may be suffering from stiff joints.

When your dog sleeps on their side, it means they feel relaxed and safe in their environment and are at a comfortable temperature. Side sleepers are trusting and loyal and will sleep almost anywhere, but tend to prefer their own bed. Sleeping in this position is when they’re likely to get the deepest sleep so you’ll often notice ‘sleep running’ and twitching during your dog’s dreams.

This pose (also called ‘the sphinx’) is when your dog sleeps with their head on top of their paws. Your dog can also fall asleep in this position with their front paws tucked in and their back legs at one side.

When dogs sleep in this position it means they’re resting, but not deeply and are still ready to jump and play in a moment’s notice. Lion’s pose sleepers are believed to be protective and devoted, these dogs will typically sleep by your feet or the front door.

This position is when your dog lays sprawled out on the ground with their belly to the floor, their back legs behind them, and their front paws stretched forward. This is a common sleeping position among puppies and very playful dogs.

When your dog sleeps in this position it means they’re tired but ready to play if the opportunity arises, it can be common for high energy dogs to sleep in this position as it’s easy to spring back up. These dogs are playful and energetic, they’ll play until they can’t anymore and plop down on any surface.

This position is when your dog sleeps curled up in a ball with all their limbs tucked close to their body. Sometimes their nose will touch their hind legs and they may even drape their tail over their body.

This position is a favourite position when they’re cold, as curling up in a ball preserves body heat. In addition, when your dog sleeps in this position, they may be seeking to protect themselves. These dogs are caring, but anxious, and this sleeping position is common in new dogs getting used to their surroundings.

This is when your dog prefers to sleep on top of you or another dog cuddled up – one of the most adorable sleeping positions! This is a great position for those that love to let their dog sleep in bed with them.

A dog who loves to cuddle is a clear sign of love and bonding, and they want to get closer to you. Cuddlers are affectionate and loving and will do anything to sleep next to you or another furry companion.

This position is one of the cutest – with your dog laying on their back with their belly up and paws in the air. As uncomfortable this position may look, this is a sign of true comfort and relaxation in dogs.

Dogs that sleep on their back do so for a few reasons, one of them to keep cool. Dogs sweat through their paws and their belly is a source of heat so by sleeping on their back it keeps them cool. As well, this is such a vulnerable position to be in, so when dogs sleep in this position it means they’re fully trusting you and their environment. 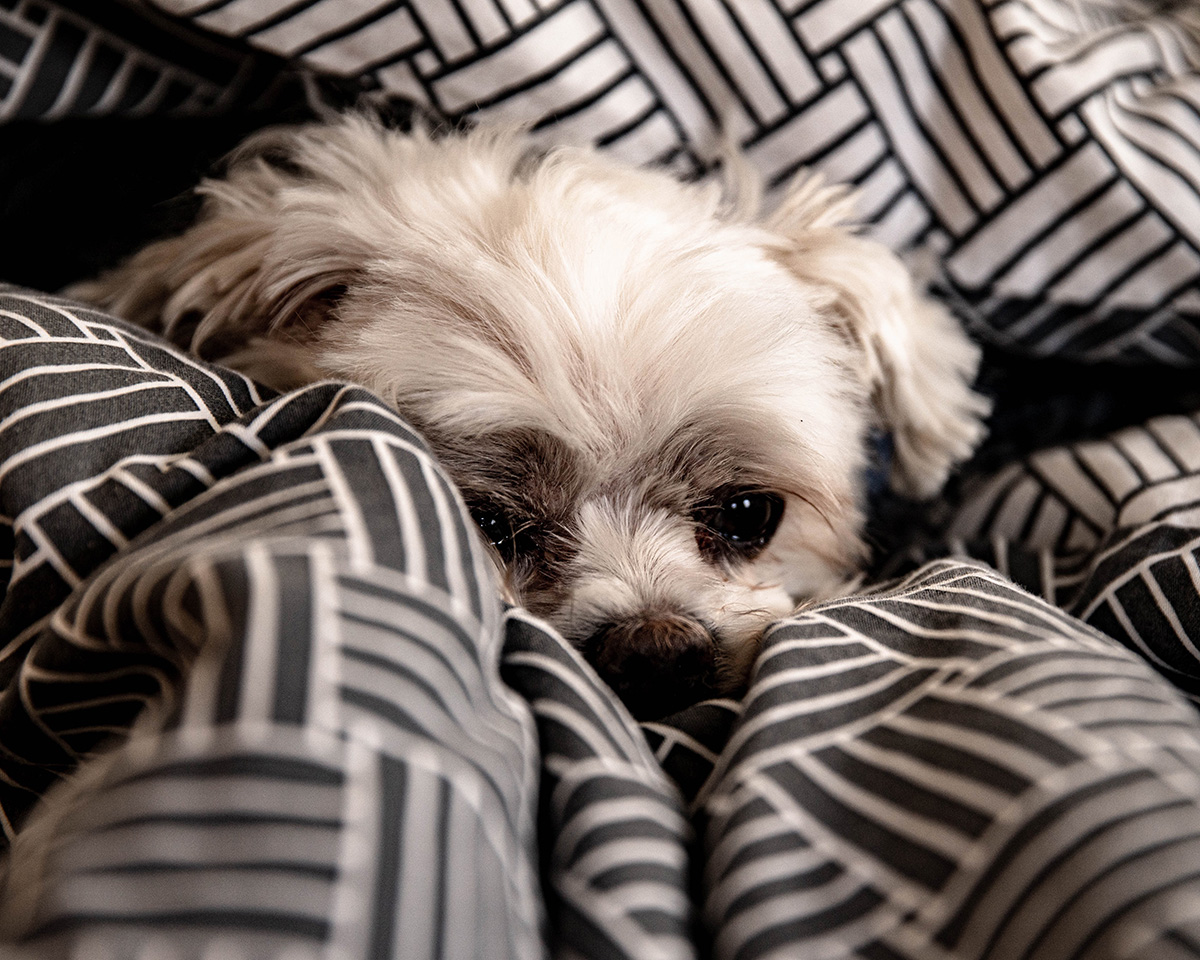 Does your dog seek out pillows, clothes, or blankets to sleep under? If your dog is a burrower, they’re searching for comfort and security. They’re affectionate but can be needy, they often require lots of attention and affection to make them feel secure and fall asleep. Try adding blankets to their bed.

Like cuddling, this position means they like to cuddle up and get as close as possible by placing their back next to you or another dog. In the simplest form, this position is a sign of love and comfort.

Sleeping back-to-back indicates a sense of intimacy, when a dog sleeps in this position they’re showing you affection and trust. Dogs may choose to sleep this way with one person in the home they feel safest with.

Some dogs seek out a sleeping position where their head and neck are raised. They’ll usually prop their head on a surface whether that be the side of their bed or a pillow.

If your dog likes to sleep where their head and neck are propped up, it could mean they have issues breathing properly – keep an eye out for worrying symptoms like faster breathing rate, noisy breathing, or a reduced ability to exercise. If you notice any of these, get in touch with your vet. 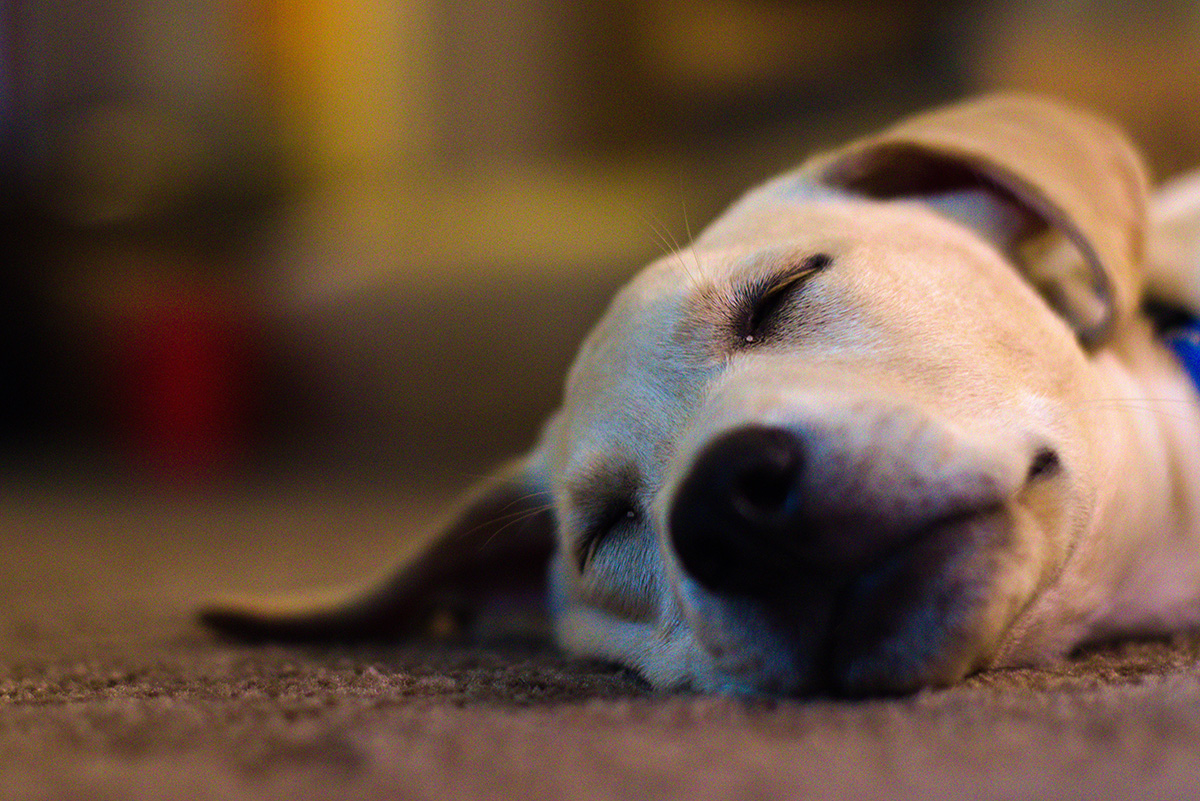 Whether it’s laying face down on the kitchen floor or  the pavement, dogs tend to sleep on cold surfaces when they’re hot. This position can take the form of different poses. Whatever it is, your dog is likely to make sure their belly is touching the cold surface.

This position is directly related to temperature and if you notice your dog seeking out cold surfaces to sleep on, try your best to cool them down and give them some water.

While your dog is fast asleep you may notice them to start to snore, bark, or even twitch. These behaviours are normal and can even give you more of an insight into the quality of sleep they’re getting.

What your dog’s yawn really means

When we yawn, it’s typically a sign that we’re either tired or bored. But with dogs, it’s a little different. Depending on how, when, and in what situation your dog yawns, it could mean a few different things – some of which are important to pay attention to.

So, what exactly does your dog’s yawn mean? Read below to find out.

Your dog’s yawn means they love you

Yawns tend to be contagious; humans are more likely to yawn when they see someone else or think about someone yawning. And this is a real thing for dogs too. In other words, because humans are empathetic, they sense the yawn in their peers. We can’t measure a dog’s empathy; however, it’s likely that yawning symbolizes a bond to their human.

A study outlined in the New York Times found that dogs can ‘catch’ yawns from humans, which researchers believe may be a sign of bonding between canines and people. So, if you notice your dog yawning, it might just be because they’re taking a cue from you.

Your dog is yawning because they’re stressed

An occasional yawn is nothing to be concerned about – but if your dog is yawning excessively, it might be a sign of stress or anxiety.

Pay attention to when, where, and how often your dog is yawning. A stray yawn before bed or during a walk is fine, as sometimes dogs yawn in anticipation of something enjoyable and is a way of controlling their enthusiasm.

But if you notice your dog is yawning in rapid succession in situations that might be anxiety-inducing – like waiting in the vet’s office – chances are, those yawns are a signal your pet is feeling overwhelmed and is a way of dealing with nervousness.

If you sense your dog is yawning because of stress, do what you can to remove them from the stressful situation and help them calm down. Once your dog is feeling calmer, the excessive yawning should taper off.

Your dog is yawning to avoid conflict

In the language of dogs, the yawn is often used as a calming signal and to avoid conflict. It’s a way of saying: “I’ve had enough, and my patience is running out.” For example in a training session your dog may yawn to deal with frustration and give himself a mental break.

Yawns may also be a sign of passivity; so, if your dog yawns in response to an altercation with a larger or more aggressive dog, it could just be their way of saying: “I don’t want any trouble.” And yawning is designed to tell other dogs to just chill out.

Your dog may just be tired

Your dog’s yawn may just mean that they’ve had a long day and are ready to go to sleep. If your dog has a reason to be tired – like spending the afternoon at the dog park or running circles around your home – or if they let out a big yawn right as they curl up to call it a night, chances are, the yawn is just a signal they’re feeling sleepy.

So, now we’ve explored what your dog’s sleeping habits and yawns mean, why not check out what your own sleeping position means! Or, go and explore the effects that can arise from letting your dog sleep in your bed.