When the temperature drops and there’s snow or ice outside most of us look forward to a good night’s sleep in a cosy bedroom – but have you ever wondered what it would be like to sleep in an igloo? Have you considered whether you might actually sleep better in a cooler environment? This article will help you discover the answers to these questions and more…

1. How igloos are built for warmth

Igloos are the traditional dome-shaped ‘snow homes’ of the Inuit people of Alaska and Canada – often known as ‘Eskimos’. When they build their homes in sub-zero temperatures they show an impressive understanding of thermodynamics. Outside temperatures may be as low as −45 °C, but inside their igloos, the temperature often ranges from −7 to 16 °C  when warmed by their body heat alone.

So how do the Eskimos create this warmth?

Firstly, they don’t build igloos from ice, but use bricks made of compressed snow. This allows for plenty of tiny air pockets in the bricks, so they don’t just act as walls, but as clever insulation to hold in the heat.

Secondly, igloos are bigger on the inside than on the outside. The Eskimos build them by digging down below the surface of the snowy landscape, so a good portion of the living space is underground, which means it’s sheltered from the wind.

To help hold in the heat, an igloo doorway is actually an entrance to a tunnel that leads down to the living space of the igloo. It’s positioned away from prevailing winds to keep out draughts and closed with a sealskin curtain, which acts as a windbreak at the entrance.

Eskimos also build their igloos to house a central fire pit. They create warmth by lighting a fire during the day, but don’t leave it burning at night.

2. Making a bed in an igloo

Inside an igloo, the living space is usually tiered. Typically, there are raised platforms made of packed snow that can be used for seating and as a bed. As heat rises, sleeping up higher allows the Eskimos to enjoy the warmest positions in the igloo.

They cover their platforms with branches and piles of sealskins and blankets to create a soft, cosy nest. These materials provide good insulation to keep heat next to their skin and they share sleeping spaces to take advantage of additional body heat.

The temperature inside an igloo can reach 16 °C and this is actually the ideal room temperature for sleeping, according to sleep experts. When your body is cool it optimises the release of the sleep hormone melatonin, so it’s a good idea to have your own bedroom at a temperature of 16 °C, to get a good night’s sleep. 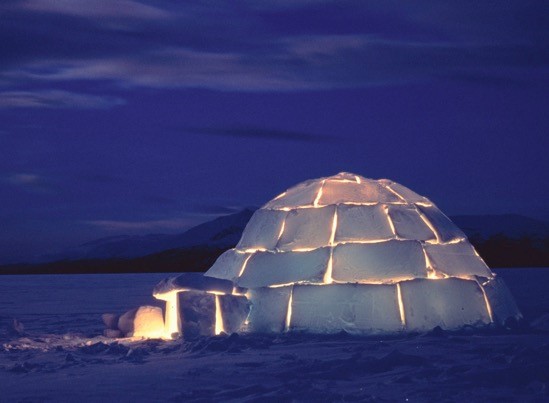 4. Experience sleeping in an igloo for yourself

If you’re tempted to try sleeping in an igloo, you can book an igloo holiday from a wide choice available and find out what the experience is like for yourself. Perhaps combine your stay in an igloo with winter activities like husky sledding or seeing the Northern Lights and make it an exciting Arctic adventure.

Whether you go for the full igloo experience or simply turn down your bedroom thermostat a few degrees you may get a better night’s sleep in a cooler environment and perform better in whatever you do.

For more advice on getting a good night’s sleep read our articles on healthy morning routines for 2022 and the health benefits of sleeping naked.