The Science Behind Why Alcohol Is Bad Before Bed

Does alcohol make you sleepy? Many people swear by it—enough to ceremonially partake in a nightcap or two before crawling into bed.

Does drinking alcohol before bed make you sleepy? Many people swear by it, enough to ceremonially partake in a nightcap or two before crawling into bed. In fact, scientists have shown that a little booze helps us fall asleep faster and increases slow-wave, or deep sleep, during the first half of the night.

But it also effects other aspects of sleep, notably, the second half of the night, which leaves much to be desired. What causes alcohol’s strange and dichotomous effect on the sleeping brain?

Should you have the nightcap or not?

Nathaniel Kleitman first described how alcohol consumption affects body temperature and movement during sleep in healthy non-drinkers in his 1939 book Sleep and Wakefulness, written 15 years before his discovery of REM sleep. Kleitman noted that, compared to control subjects, those who drank alcohol before bed had a lower body temperature during the first half of the night. Halfway through, however, the alcohol drinkers’ body temperature rose to above-normal levels. Body movement had a similar pattern—below normal in the beginning of the night, with significantly more restlessness later on.

In the early 1970s, Williams and Salamy began experimenting with different concentrations of alcohol and their effect on sleep. Participants were assigned to consume anything from one to six drinks, thirty to sixty minutes before bedtime. This is the time that yields the peak blood alcohol concentration at lights-out. (A standard drink is defined as 350ml beer, 15ml wine, or 44ml of 80-proof distilled spirits).

This yielded an interesting result: despite falling asleep more quickly, the subjects who consumed more alcohol before bed woke more frequently and experienced lighter sleep during the second half of the night. Williams and Salamy identified this as being a rebound effect. 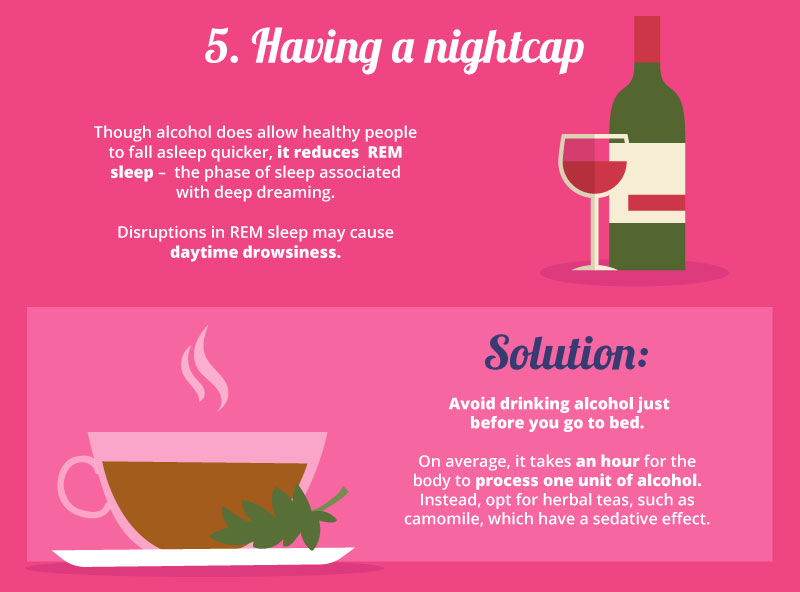 Related: 7 Sleep Mistakes You Don’t Know You’re Making and How to Fix Them

In other words, after the body metabolised and eliminated the alcohol, certain sleep variables reversed themselves. For example, too much slow-wave sleep during the first half of the night suddenly transitioned into too little. This manifests as disturbed sleep.

The idea behind the rebound effect is that the body initially adjusts for alcohol’s effects in order to maintain normal sleep during the first half of the night. But even after the body metabolises alcohol halfway through the night, it stubbornly continues to adjust, ultimately overcompensating and resulting in sleep disruption.

But what exactly is adjusting, and what’s causing the rebound effect? The short answer is, nobody really knows the whole story, because what occurs during sleep is not fully understood. But, neurochemically, we have some theories.

When you take a swig of alcohol, it goes right into the bloodstream. As such, it’s in your brain within minutes. Alcohol mimics gamma-aminobutyric acid (GABA), the major inhibitory neurotransmitter in the brain. When bound to a GABA receptor on a neuron, alcohol allows either the influx of negative (or efflux of positive) ions, giving the cell a more negative charge. Thus, the neuron’s attempt to fire an action response is stunted.

Similarly, alcohol also inhibits the brain’s major excitatory neurotransmitter, glutamate, by blocking the function of its receptors. Since glutamatergic and GABAergic neurons comprise 90% of all brain cells, this is a pretty big deal.

Alcohol also enhances the ability for GABA to re-enter the neuron. But, perhaps even more detrimental, GABA (inhibitory) is recycled into glutamate (excitatory) in a continuous, viscous cycle. This means that the brain is constantly battling to relax and wake up, when you drink alcohol before bed.

The theory is that GABA dominates the first half of the night, after an evening of drinking, allowing us to fall asleep deeply. But once GABA metabolises, much of it has been transformed into glutamate. Glutamate-releasing brain regions like the reticular activating system—which, among other things, regulates sleep, waking and arousal—are likely to be where the midnight disruptions kick in.

Should you partake in a night of hard drinking and expect a good night’s sleep? No way. But the real question…

Is one drink before bed going to affect sleep that much?

A person can metabolise roughly 0.25 oz of alcohol each hour (depending on the individual), which is quite slow given the speed at which it’s absorbed.

So keep the drink small, and keep it early. Sleep now, wine later!