There’s a Klaus in My House: What to Do if Your Child Has Santaphobia

For most kids, December is a month of excitement, filled with friendly reindeer, happy elves, and the promise of presents for good behaviour. But for a select few, this most exciting time of the year comes...

For most kids, December is a month of excitement, filled with friendly reindeer, happy elves, and the promise of presents for good behaviour. But for a select few, this most exciting time of the year comes with a catch: Santaphobia – the fear of Santa Claus.

Why are children scared of Santa?

It’s not uncommon for children to suffer from Santaphobia. After all, Santa Claus is a strange, unknown man dressed in red who breaks into their house via the chimney. Add in the fact he’s known for watching their behaviour all year round and it’s quite understandable why some kids are scared of old St Nicholas.

Related: How to Perfect the Art of a Christmas Sleepover in 2020

Here, we explore some of the reasons why:

1. He’s not always the same size and his accent changes

Speaking with Pyschologies.co.uk, Emma Citron identifies how many kids come into contact with a number of different Santas in December. In school, St Nic may have had a Yorkshire accent and stood around 5 ft 6 tall. Then, at the weekend, your child may have come across a Santa who’s much taller with a different accent. How they process this is as yet unknown and there’s a fear that this lack of consistency may make a trip to see the big guy a little overwhelming. Citron states:

“It’s not known how children reconcile these differences in their own mind” she says. “It’s possible that they have some inkling that Santa isn’t real, but don’t want to stop believing in the magic.”

Related: How To Avoid Excitement and Sleep On Christmas Eve

2.  He’s the most important man of the year

Another reason your little one may have a fear of Santa Claus is because of how important he is. With so much riding on the big man’s opinion of us, it’s not surprising his appearance comes with some added pressure. With more talk about Santa, comes more judgement over behaviour throughout the year.

He has taken on a god-like presence in our lives, looming so large over all our Christmas celebrations. Coming face to face with the man on whom you have pinned so many hopes can evoke such strong emotions, that the experience becomes completely overwhelming.

For most of the year, parents are giving advice to their children about staying away from strangers and using common sense. Come Christmas, that kind of goes out the window and the rules all change. This lack of consistency can be a little off-putting for our youngsters. As parents, we’re one of the biggest authorities in our children’s lives and a lack of consistency can send confusing signals. Have a look at this post from Verywellfamily.co.uk for more information.

What’s more, Mandy Seyfang, from the Department of Education and Childhood Development in Australia, identified how Santaphobia may actually be a sign of developed emotional intelligence. At all other times of the year, we promote a healthy awareness and mistrust of strangers. But when it comes to Christmas, we expect our children to accept this strange red man wholeheartedly and without doubt. Logically speaking, the fear of Santa Claus is one that’s actually a sign your children have developed emotional intelligence and the ability to judge a scenario for its trustworthiness. 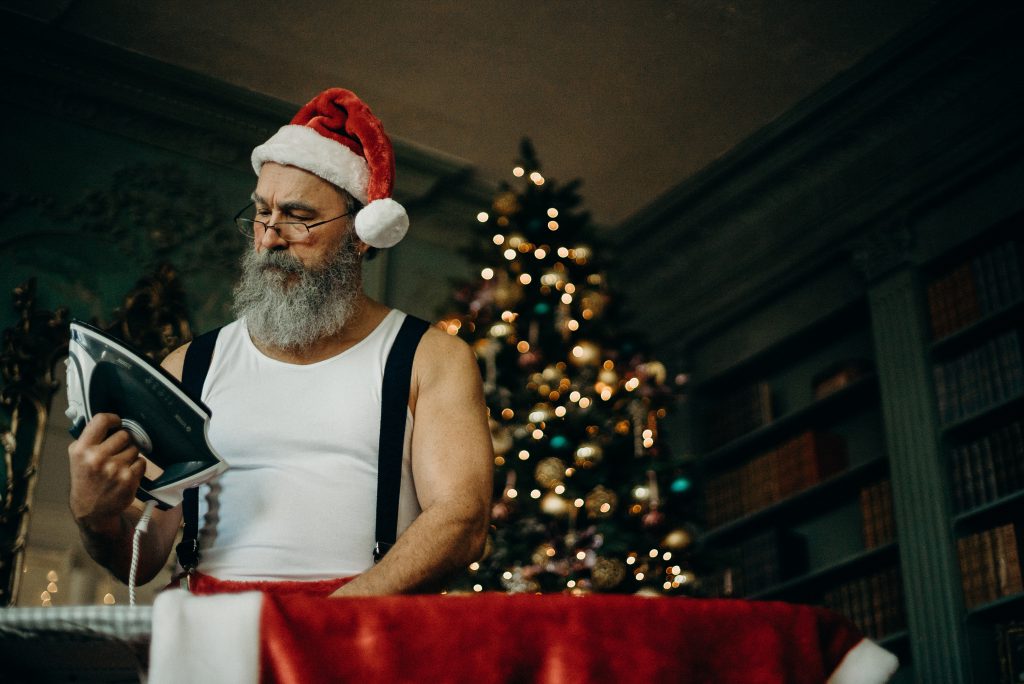 Do children grow out of Santaphobia?

According to Pyschologies.co.uk, Santaphobia is most common in children under four years old. In most cases, once children get to 5 years, they lose their fear and start to get wholly excited again.

As toddlers, our little ones are starting to feel emotions in completely different ways to what they’ve ever experienced. It’s a big part of what we label ‘the terrible twos’.

This new wave of emotions and fears is a healthy part of their development but it’s not until around 4 years that they start to manage these fears.

Related: How To Talk To Your Children About Their Nightmares

By age 4, most children start to use strategies to eliminate disturbing external stimuli. In other words, they cover their eyes when they’re scared and plug their ears when they hear a loud noise. Without this ability to manage their own fears, they’ll likely let their worries get the better of them. Whether this presents as tantrums or tears is irrelevant, it simply means you need to help them. Next, we’ll explore how to do exactly that.

How to stop your child being scared of Santa

While the fear of Santa Claus is totally normal and a common part of childhood development, it’s not something parents just have to grin and bear. In fact, active involvement is key. Here, we’ll explore some ideas for helping your kid overcome their Santaphobia: 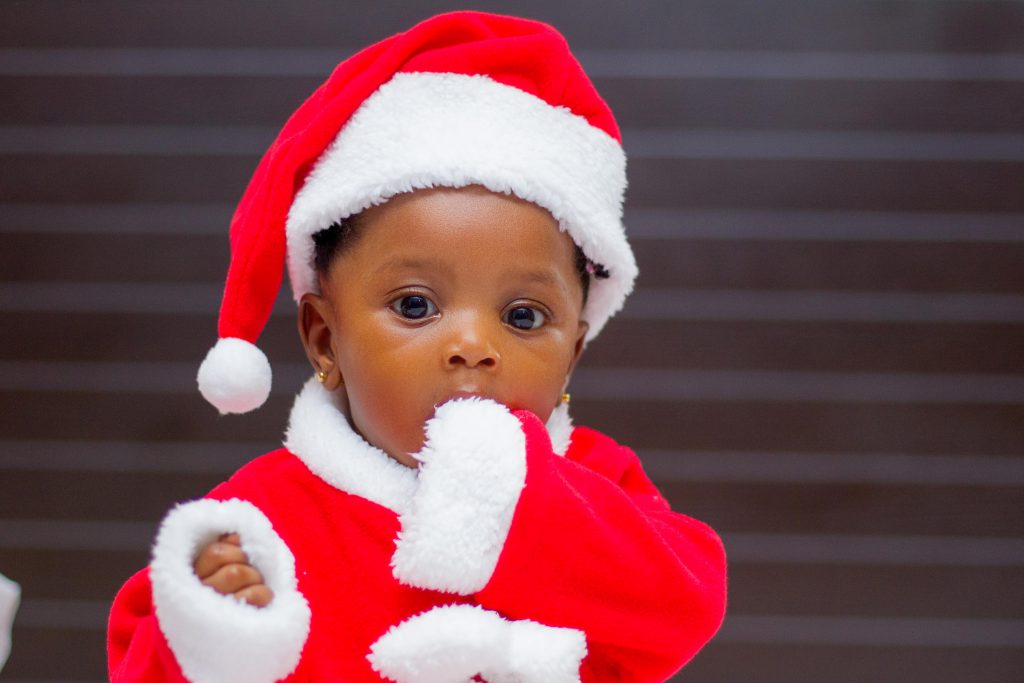 Time is nature’s greatest healer and it can be applied to Santaphobia too. Alongside developed emotional intelligence, a big reason why children get over their fear of Santa Claus around 4 years of age is because they’ve experienced him before. Introducing Santa a little earlier in the year may give your youngster a bit more time to prepare and ask questions about the big guy. If he’s only introduced when the magic and excitement is all around, they may feel a little overwhelmed when it comes to asking questions

2. Give your children a sense of control when it comes to Christmas

It’s important to allow your children to feel comfortable in presenting their fears and saying no to things they don’t like. This is a skill that even adults struggle with at times. If you’re worried that your youngster may be developing Santaphobia, tell them that the ball is in their court. If there is a visit to a grotto planned, explain not only how exciting it will be but discuss their options, too.

Many parents think it’s best to overcome the fear by throwing their children in at the deep end. How often have you seen a crying child in the queue for the grotto or the wide eyes of fear when sitting on Santa’s lap? While it may work for some, we wouldn’t recommend this approach as it creates more negative connotations with Santa Claus. Instead, allow your kids to experience the magic of Christmas in their own way. In time, they’ll learn that this festive period really is the most exciting part of the year.

3. Don’t ruin the magic but be aware of your child’s fears

There’s no reason to discount the existence of Santa Claus. Let your child figure this one out by themself. Instead, a simple awareness of your little one’s fears will suffice. Speaking with Parents.com, Dr Garber, author of Monsters Under The Bed and Other Childhood Fears says:

Respect your child’s fears, acknowledge that they’re feeling anxious, and reassure her that she’s safe. Say, “It’s okay. You’ll get used to Santa. It just might take a little time.” This sends the message that they will eventually overcome their fear.

It’s also important to understand that a fear of Santa is a totally normal phase of development for children. In other words, not one to ruin the magic of Christmas forever. Don’t be tempted to give away the game. Instead, introduce coping mechanisms and give your little ones the space to feel scared of Santa. In time, with you at their side, they’ll come round to the idea. Here’s what Andrew Adesman, M.D., chief of developmental and behavioral pediatrics, had to say to Parents.com:

Although it may be tempting to try to reassure an anxious child by revealing the secret, this revelation may not be sufficient to quell his fears and it may also compromise future Santa-related Christmas magic.

In summary, the main way to help children overcome their fear of Santa is to accept their fear. Understanding why they feel the way they do will ensure the actions you take are sensible and aimed at solving their fears. Introduce the concept of Santa Claus slowly and with excitement, highlighting the benefits of Christmas while accepting it can be an overwhelming time of year.

Have your children ever suffered from a fear of Santa Claus? Let us know how you approached it in the comments below.