Is Your Diet Preventing You From Sleeping?

What you eat (and when you eat it) not only affects your waistline, but your mood, your health and, scientists claim, your sleep patterns. It’s not just caffeine-containing food and drinks like chocolate, coffee and tea that...

What you eat (and when you eat it) not only affects your waistline, but your mood, your health and, scientists claim, your sleep patterns. It’s not just caffeine-containing food and drinks like chocolate, coffee and tea that will keep you awake at night, but a range of unsuspecting culprits.

For a more positive outlook on diet, read my previous post on foods that help you get to sleep.

Want to sleep like a baby? Here’s what to avoid:

Eating a late supper is a bad idea if you are prone to sleep problems. One study in the American Journal of Gastroenterology a few years ago looked at the eating habits of 350 people and found those who ate a meal within three hours of going to bed had a seven-fold increase of heartburn. Leaving three or four hours between eating and going to bed – roughly the time it takes for food to clear the stomach – seems to be the healthy threshold, scientists believe. ‘If you plan to eat a heavy meal, you need a good few hours for it to digest,’ says Sammy Margo, author of the Good Sleep Guide.

Caffeine, a well-known stimulant, is notorious for keeping people awake at night. However, a recent study revealed that caffeine consumption even six hours before bedtime can have significant, disruptive effects on your shut-eye. Reporting in the Journal of Clinical Sleep Medicine, the experts showed how consuming 400 mg of caffeine (about 2-3 regular cups of coffee) either at bedtime, three or even six hours prior to hitting the sack significantly disrupted sleep. In many cases, sleep time was dramatically reduced by more than one hour.

‘People tend to be less likely to detect the disruptive effects of caffeine on sleep when taken in the afternoon,’ said author Christopher Drake, associate professor of psychiatry and behavioural neurosciences at Wayne State University. ‘But drinking a big cup of coffee on the way home from work can lead to negative effects on sleep, just as if someone were to consume caffeine closer to bedtime.’ 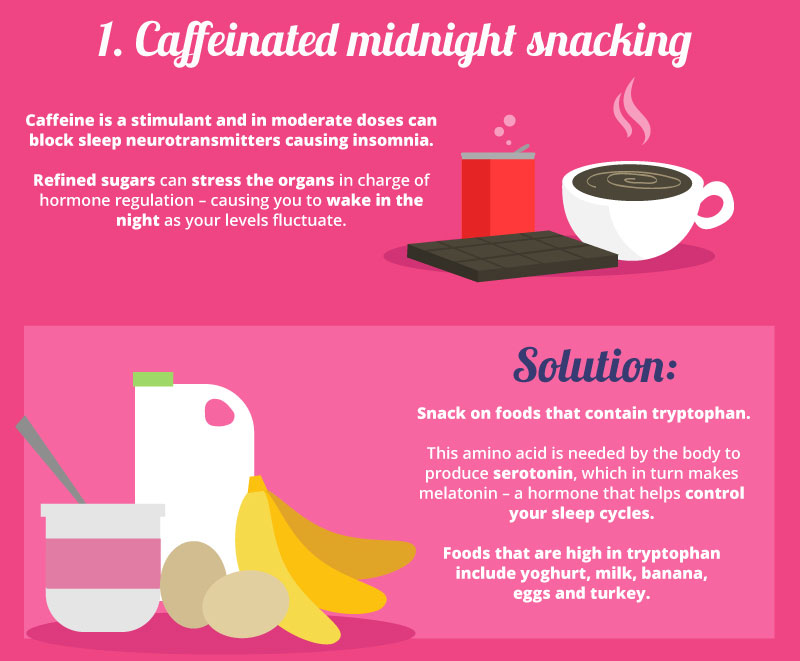 Click the image to read our ‘7 Sleep Mistakes’ infographic and find out what else could be stopping you sleep, and how to remove them from your life.

Gorging on foods that are unhealthily high in fat like pizza, chips and fast food during the day, or raiding the fridge for sausages and cheese at night, can throw your internal body clock off kilter, meaning that you struggle to maintain a regular sleep routine.

What’s more, it can trigger you to gobble extra calories when you should be asleep. That was the conclusion of a study by Joe Bass, assistant professor of medicine and neurobiology and physiology at Northwestern University in the US. ‘We found that, as an animal on a high-fat diet gains weight, it eats at the inappropriate time for its sleep/wake cycle,’ said Bass. ‘All the excess calories were consumed when the animal should have been resting. For a human, that would be like raiding the refrigerator in the middle of the night and binging on junk food.’

It’s reputed to help you unwind, but that late night tipple could have the opposite effect. Studies show that while alcohol helps you to fall asleep faster, it also disrupts the sleep cycle meaning you are likely to be tossing and turning through the night.

Last year, neurologists at the University of Missouri reported how a nightcap interferes with sleep homeostasis, the body’s in-built sleep-regulating mechanism. They found that alcohol puts pressure on someone to fall asleep and when this happens, disrupted sleep usually follows. ‘Based on our results, it’s clear that alcohol should not be used as a sleep aid,’ said Dr Pradeep Sahota, author of the study. ‘Alcohol disrupts sleep and the quality of sleep is diminished.’

Read the science behind why alcohol is bad before bed.

Eating that late night curry or adding spices to your cooking before you go to bed won’t give you nightmares, but could mean you struggle to sleep well. ‘A lot of people find spicy foods worsen heartburn and lead to restless sleep,’ Margo says. They can also raise core body temperature which in itself is linked to poor sleep quality. In one study on healthy young men, adding Tabasco sauce or mustard to an evening meal led to them going to sleep later and having a shorter overall amount of sleep. A substance called capsaicin, present in the spices, is known to raise body temperature, and that was thought to be behind the sleep-disrupted nights. 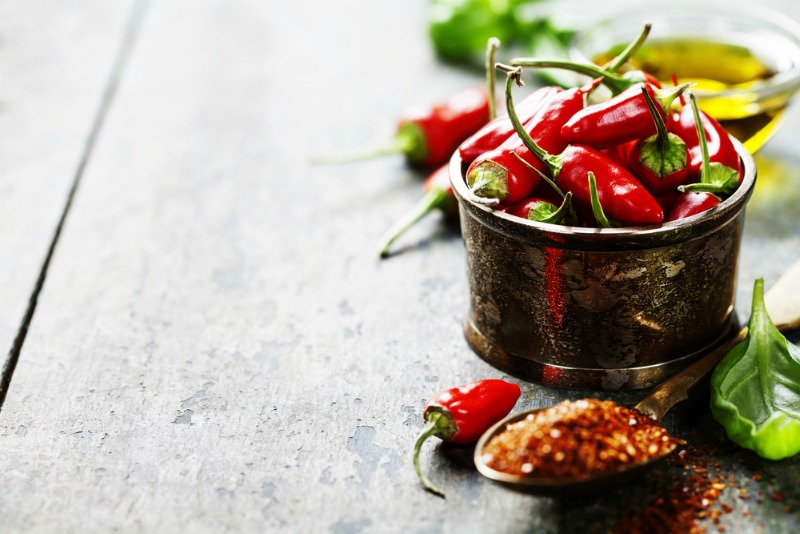 Have you found any of these foods to be particularly disruptive for your sleep? Or are you already aware which snack is stopping you sleep, but think it’s too tasty to stop? Let us know in the comments below!

See all articles by Peta Bee