Sleeping at Work: How to Improve Employees’ Sleep

It goes without saying that a better night’s sleep leads to a more productive day at work. However, our recent Sleep Better Study found that three in four employees in the UK suffer persistent sleep problems....

It goes without saying that a better night’s sleep leads to a more productive day at work. However, our recent Sleep Better Study found that three in four employees in the UK suffer persistent sleep problems. While there is a lot an individual can do to improve their sleep, there are several things their employers can do to help them with sleeping at work. This includes introducing a ‘napping at work’ scheme, or even just diminishing the sleep stigma.

Related: How to Unwind From Work in the Evening

The Sleep Better Study: The Findings

Our 2019 study was conducted with the Clinical Sleep Research Unit at Loughborough University to discover how well the nation is sleeping. We surveyed 2,002 Dreams employees with online questionnaires as well as sleep diaries to track their sleep their health and their performance at work.

The findings revealed that 78% of workers have experienced consistent periods of poor sleep. To the point where 54% struggle to stay awake the following day. A quarter added that their sleep problems mean they cannot complete the work they had planned. This even leads to two sick days on average being taken off a year so the employees can catch up on missed sleep.

Despite there clearly being a nationwide lack of sleep, there seems to be a stigma with discussing it in work. A huge 69% of employees have never spoken about feeling tired with their employer and two-thirds of business leaders (63%) feel it is an individual’s responsibility, not the company’s, to manage their level of sleep. So much so, that only 3% of businesses have sleep policies in place. 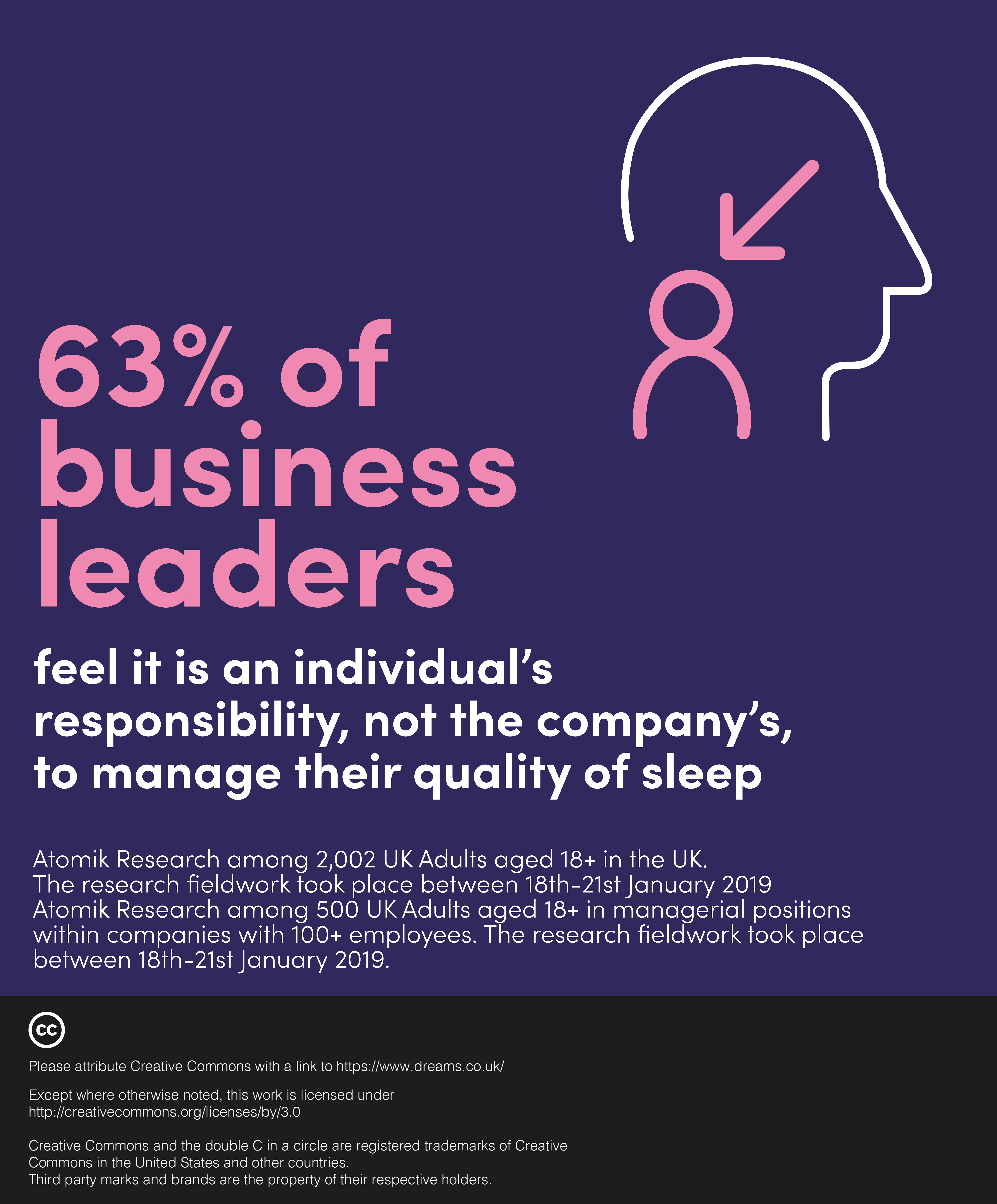 The benefits of sleeping at work initiatives

The sleep study reveals a clear necessity to prioritise sleep amongst employees. The findings also showed that taking action and introducing sleep initiatives in the office would have a positive effect on the following:

Productivity: 34% of people surveyed said they feel more productive and achieve more at work after a good night’s sleep and a quarter said it is easier to complete tasks more efficiently and that their work was more accurate.

Company culture: A fifth (17%) say they have more positive interactions with colleagues after a good night’s sleep.

Talent attraction and retention: Having sleep initiatives in place is also more likely to increase interest in a role, with 24% being more likely to accept a role at a company with a good sleep policy. A third (33%) also said they would be less likely to look elsewhere if their company offered sleep support. 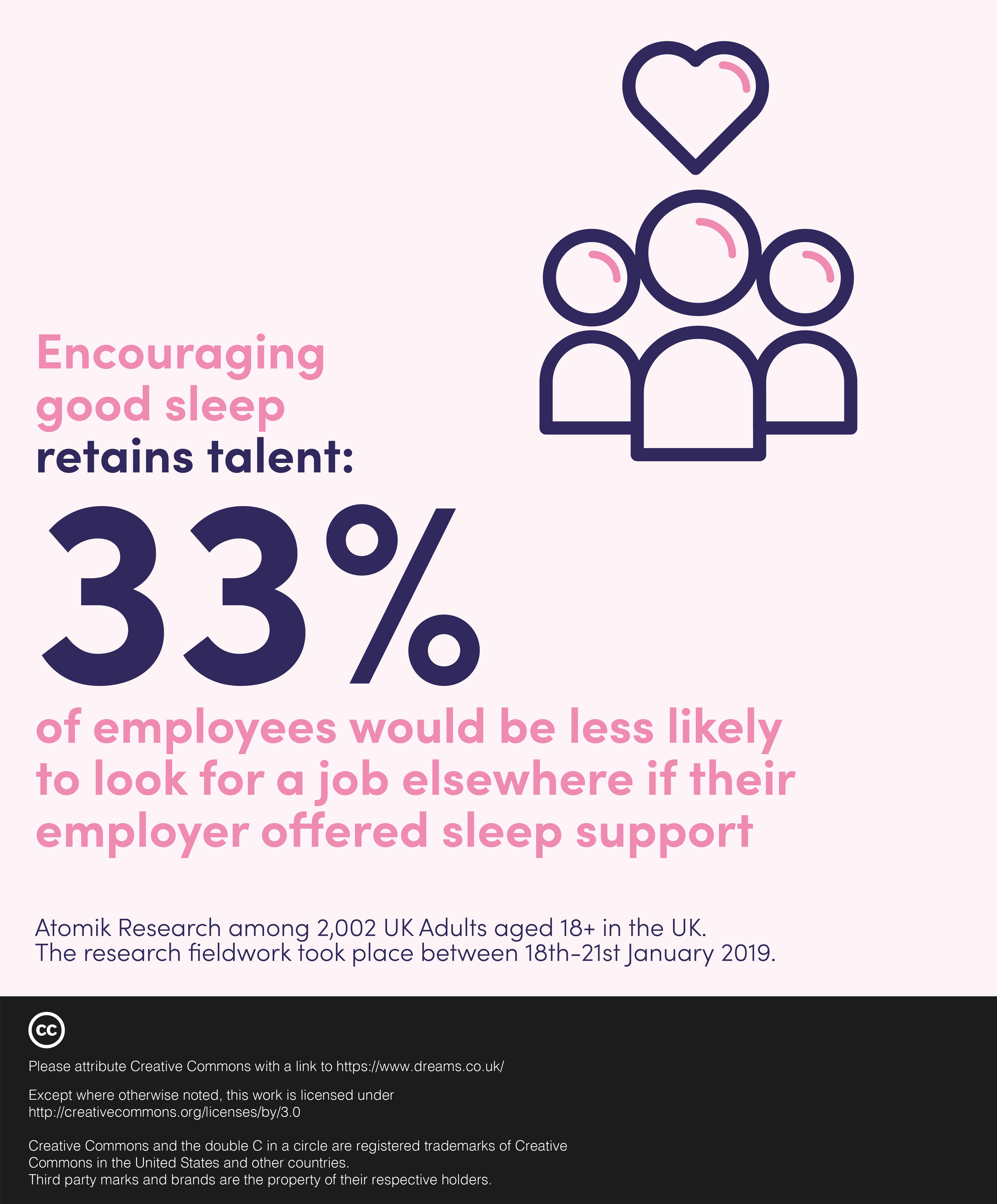 How to improve employees’ sleep

As a company, there are several things you can do to promote better sleep for your employees. This includes sleep health training for managers, allowing them to spot when an employee is struggling and creating an atmosphere where they can access help.

On top of that, simple changes such as encouraging discussions about sleep and discouraging out-of-hours working will help employees feel at ease. Create a culture where employees feel they can take a day off if sick, as according to Glassdoor, 61% of employees would rather work when ill, instead of taking a day off. Introducing flexitime and allowing employees an occasional lie-in can also go a long way and create a level of trust with your staff.

If you want to take it further, consider creating spaces for napping in the office. Google has famously installed sleep pods allowing staff to clock off when they need to. Other renowned companies such as Ben & Jerrys and Nike provide spaces for employees to meditate and nap. Creating designated rest areas, whether employees nap or simply just relax, can help them to recharge during the day.

Does your company have sleep policies in place? Let us know your thoughts in the comments.