How An Explorer Sleeps In The Desert

Deserts are empty, deathly places – or so we tend to imagine. But when I think back to my time in the Chalbi or Namib, or even the vast Gobi, I don’t think of the endless...

Deserts are empty, deathly places – or so we tend to imagine. But when I think back to my time in the Chalbi or Namib, or even the vast Gobi, I don’t think of the endless desolation. I think of the array of life; a lone thorn-tree, a beautiful beetle or even a snake.

I particularly remember how in the Gobi I once stumbled upon an unusually aggressive adder, and somehow out there alone in the gravel plains this encounter seemed a cause of celebration. Here was a fellow life-form! As venomous as it was, this creature seemed on my side, the side of the living. Whereas in rain forest you feel bottled in by all the life-forms around you – so many species everywhere fighting it out – in the desert every living thing is magnified. Each encounter becomes special. I’ve felt very lonely while alone in the jungle, but never in a desert.

If deserts offer companionship in the daytime, they do so even more at night. Time and again I’ve gazed up at the magnificent stars but found myself far from being alone with the infinite; sooner or later I‘ll be visited by a friendly (and often rather hopeful) little rat or fox. The sun dips, the heat fades and the desert wakes.

Another time, towards the end of my 1000 km trek through the Namib, I was feeling utterly exhausted. All I wanted was sleep – but no hope of that. My lips were bleeding, my three camels threatening to head home, and no one on the planet knew where I was. I lay there trying to recall why on earth I’d set out on the journey, three months before.

But later, towards the first light of dawn, I noticed the sands around my head were laced with tiny tracks, each marking the feeding foray of a little rodent. So from that night on I’d always scatter my precious muesli around the campsite before zipping myself into my sleeping bag for the night. My visitors were mainly hairy-footed gerbils, as it turned out, and I enjoyed thinking that they were lending me comfort just as they were to thousands of children back home who kept them as pets and cherished them as special friends.

Related: How Does A Round-The-World Sailor Sleep At Sea?

Not all night visitors are desirable, of course.  A camp fire might stave off the cold but its light can also attract scorpions and spiders. And once in the Namib a friend dropped me a message from a plane – ‘BEWARE OF LIONS! LOTS OF THEM!’. There was not all that much I could do other than fire a distress flare to try and scare them off. I did have a revolver of sorts, and the training simple enough – offer a charging lion your left arm, and as it takes hold shoot calmly with your right. But somehow this procedure seemed unsatisfactory. The major danger anyway being to my camels, who might (quite understandably) feel perturbed by an advancing pride – or my distress flare! – and make a dash for it. Together we listened to the lions grunting away through the night. 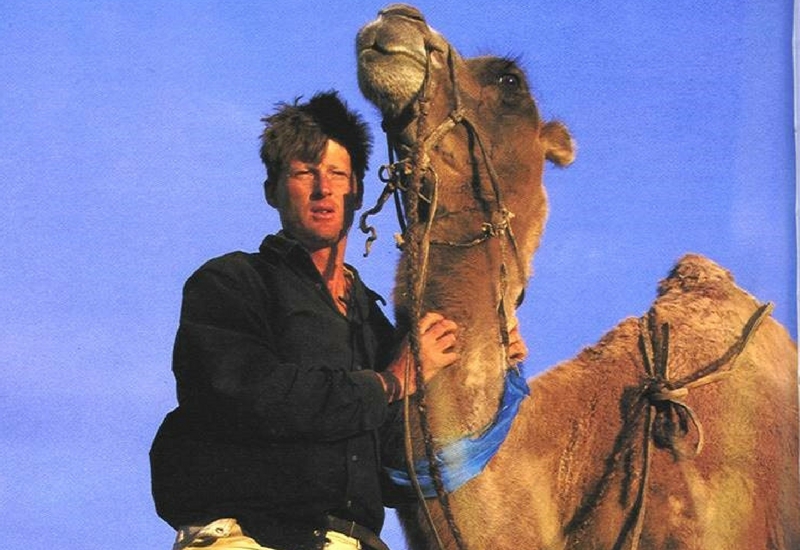 The truth is, though, most dangers are of your own making. Once in the Gobi I walked off through the darkness to gather my camels in from grazing. At a distance of only about 100 metres I turned around and couldn’t see my camp, not a trace of it in all the blackness. And I’d be out there still, perhaps, if I hadn’t remembered that the moon, when it came up, would be almost full. I decided to bide my time. As the temperature dropped, I sat my two camels close together and – dressed in only a thin shirt and trousers – snuggled between them while waiting for the moonlight. The temperature was down to about minus ten by the time I could lead my camels in.

Generally, though, the nights are the times I’ve savoured. In Australia’s Gibson Desert the indignant dingo puppy who’d again and again drag off my blanket to chew, or the black-backed jackals who’d patiently watch me make camp. All these and many more were fellow witnesses to the desert as it revealed itself in the dark.

Keep an eye out for future sleep perspectives from our guest expert writers!

See all articles by Benedict Allen